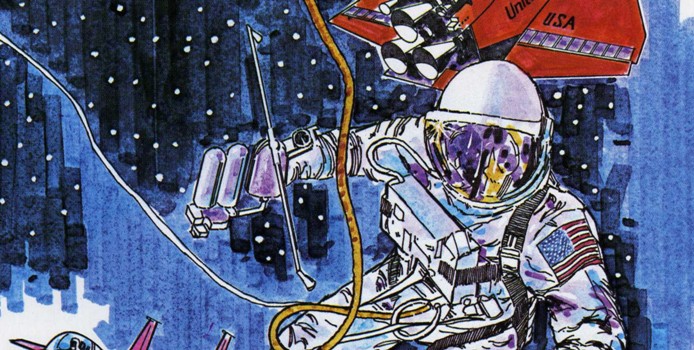 Worcester and the National Space Program

The dream of yesterday is the hope of today and the reality of tomorrow.

Robert Goddard is widely known as “the father of the space age.” When he was a boy, he dreamed of going to the moon. When he grew up, he was one of the first scientists to explore the potential of rocket power. On March 16, 1926, in Auburn, Massachusetts, he launched the first rocket propelled by liquid fuel in the world.

In 1929 Goddard launched another rocket in Auburn, which prompted the Massachusetts fire marshal to ban this activity. Goddard received little support for his pioneering efforts. In reports and editorials, newspapers poked fun at the “Moon Man.”

Aviator Charles Lindbergh believed in Goddard and convinced the Guggenheim Foundation to support his work. With assistance of the foundation, Goddard moved to Roswell, New Mexico, where he continued his experiments. During World War II, the U.S. government employed Goddard to develop weapons for the Allied effort.

Goddard was born in Worcester in 1882, graduated from South High School in 1904, from Worcester Polytechnic Institute (WPI) in 1908, and earned a doctorate in physics from Clark University in 1911. He taught physics at Clark for many years. Edwin Aldrin, Sr., father of Apollo II astronaut “Buzz” Aldrin, was one of Goddard’s students.

Goddard died on August 10, 1945. He is buried in Worcester’s Hope Cemetery.

Made in Worcester, Sent into Space

Allegro Microsystems
115 Northeast Cutoff, Worcester
In 1965 Sprague Electric (now Allegro MicroSystems) opened a plan in Worcester to make computer chips. Less than a month before Apollo astronauts journeyed to the moon in July of 1969, NASA asked the company for help. NASA officials explained that world leaders were writing messages for the astronauts to carry to the Moon. NASA needed Sprague Electric to develop a process that would reproduce the messages so that they could be left on the moon for people in the future to read.

The company designed a thin disc made of silicon. It was slightly larger than a man’s thumb and 14/1000 of an inch thick. Using photography, the original messages were reduced to fit on the disc and imprinted with ultraviolet light on the silicon’s mirror-like surface. The messages can be read clearly under a microscope. Astronauts left the disc with parts of the Lunar Excursion Model on the moon in July 1969.

In the late 1950s, David Clark Company began its long association with the space program. When John Glenn orbited the earth aboard a Mercury spacecraft in 1962, he used a David Clark headset. The company also designed and manufactured suits for the Gemini astronauts. Astronaut Ed White wore a David Clark suit in the first U.S. spacewalk in 1965.

When Neil Armstrong set foot on the moon’s surface on July 20, 1969, he talked with people on Earth by using a “communications carrier” (headset) made by David Clark Company.

Today space shuttle astronauts wear suits for launch and re-entry manufactured by the company. The suits protect astronauts from the dangers of high-speed flight and hazardous environment of space.

Honematic also made the “legs” of the Lunar Excursion Module (LEM) that provided a base on the moon for Apollo astronauts in July 1969 and for those on later Apollo missions.

Processes That Helped Propel Us Into Space

Wyman-Gordon Company
244 Worcester Street, North Grafton
Wyman-Gordon Company, founded in Worcester in 1883, is now one of the world leaders in forging airplane and aerospace parts such as jet turbine engines and aircraft frames. Forging is the shaping of metal after it has been heated to a plastic, or soft, state.

In 1865, tin manufacturer John Boynton gave $1000 to the city to establish the Worcester Free Institute of Industrial Scinece on land donated by Stephen Salisbury II.

Now known as Worcester Polytechnic Institute, the college is one of the nation’s leading schools in science and engineering.

Robert Goddard graduated from WPI in 1909. Space shuttle astronaut Albert Sacco was the head of the Chemical Engineering Department at WPI when he was aboard the Columbia in 1995, focusing on material science and biotechnology while in space.