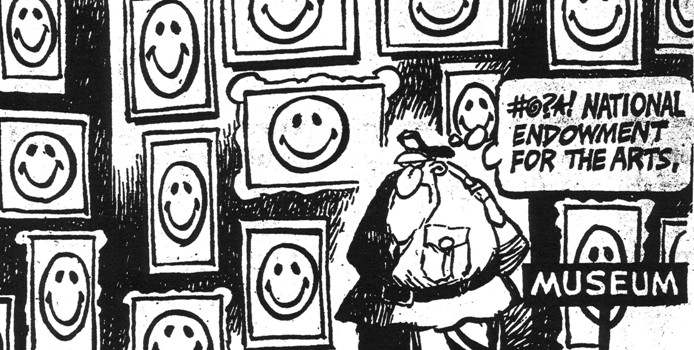 Young turned to Worcester freelance artist Harvey Ball, requesting he create a little smile to be used on buttons, desk cards and posters. Ball drew a smile but, not satisfied with the result; he added two eyes, making a smiley face. The whole drawing, he recalled later, took ten minutes. He was paid $240 for the entire campaign, and never received any further profit from his smiley face design.

The smiley face attained a life of its own well beyond the company’s walls. Harvey Ball’s design sparked a fad that swept the nation in the early 1970s. By 1971, smiley face was the hottest selling image in the country: an estimated fifty million smiley buttons alone had been sold, and the image appeared on countless other products as well.

Eventually, smiley’s popularity began to wane, and by the mid-1970s the fad was over. The image never entirely disappeared though, and began to make a significant comeback in the late 1980s, with the resurgence of sixties-and seventies-inspired symbols, fashions, and music. Smiley’s popularity continues today, its appeal both universal and enduring.

About Harvey Ball
Harvey Ball (1921-2001) was born and raised in Worcester. He attended South High School, where he was especially interested in art. In his third year of high school, he apprenticed himself to a local sign painter, who taught him how to create visual images with a strong impact.

In 1940 Harvey won a scholarship to attend Worcester Art Museum school, and received training in the fine arts. Following service in the U.S. Army during World War II, Ball returned to Worcester where he worked for a local advertising agency. In 1959 he started his own business, Harvey Ball Advertising. He had completed other projects for State Mutual before receiving the smiley face commission.

World Smile Day is held on the first Friday of October each year and is a day dedicated to “good cheer and good works.” The catch phrase for the day is “Do an act of kindness-help one person smile.”

1. Once There Were Some People Who Were Feeling Kind Of Blue So They Called Up Harvey Ball, He Knew Exactly What to Do He Drew A Smiley Face, He Made It Yellow Too It was Sunny, It was Simple And He Said “I’m Through” (Now).

2. Well The People Got Excited When They Saw What He Had Done So They Made Up Smiley Buttons And They Handed Out A Ton Which Went Around The World Like The World Goes Round The Sun For A Smile Begets Another So There’s Never Just One (So).

3. Well That’s A Little Story Of How Smiley Came To Be Back In December Of 1963 Call The Guiness Book Of Records Tell Them “Quick Come See” The Happiest Face In All of History (And).

4. O The Moral Of The Story Is To Help The World To Smile You Do An Act Of Kindness, You Go The Extra Mile And What You Do Comes Back To You In Just A Little While For Goodness Is Contagious And It’s Never Out Of Style (So).