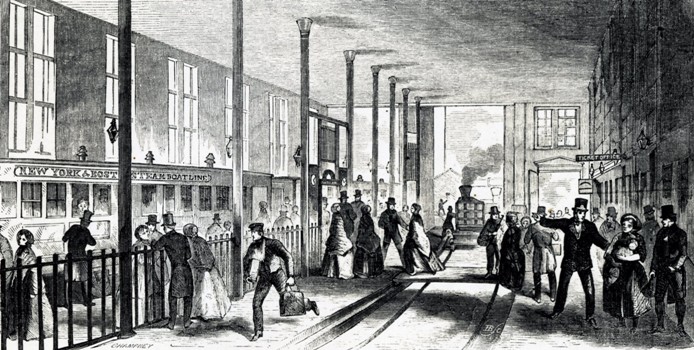 Beginning in colonial days traditional means of transportation included horse and carriage, and sleds in snow. Farmers and artisans hauled products by ox-drawn carts and wagons. Movement of people, goods and ideas was slow. During the American Revolution, when information had to travel long distances in a hurry, things began to speed up. Soon after the war ended, a former military officer, Captain Levi Pease of Shrewsbury (1740-1824), initiated stage coach routes on turnpikes-themselves a new phenomena-toll roads deliberately connecting disparate locales. In the early 1800s, improvements accelerated movement and also created hubs of transportation and communication. Worcester was one of these hubs.

Stages and Turnpikes
Travel first improved with stages and turnpikes. The first stage line in New England opened in 1783, established by Captain Pease. It ran from Hartford, Connecticut, to Boston, through Worcester. After the Boston-and-Worcester turnpike opened in 1806, travel between these destinations by stage took seven hours. Captain Pease expanded stage service throughout the Northeast, in partnership with Reuben Sikes (1755-1824). Stages increased the volume of travel in and out of Worcester. Travelers needed places to eat and stay overnight, which was a boost to the local economy. Seeing opportunity, Colonel Sikes purchased the Exchange Hotel, on the corner of Main and Market Streets, in 1807. According to local memory,

[Sikes] made this hotel the leading one in the town, and the grand centre of arrival and departure of all the different stages of lines connecting Worcester with all sections of the country.

After Colonel Sikes died, the stage business moved to Central Hotel, corner of Main and Exchange Streets, under Ginery Twichell (1811-1833), the most distinguished stage proprietor and express rider of the time. The hotel was headquarters from 1830 to 1846, when-changing with the times-he became president of a railroad company. In 1836, 122 stages left Worcester weekly.

Blackstone Canal
When the Blackstone Canal opened on October 7, 1828, it connected Worcester to Providence and the wider world of international trade. Although the canal was never a financial success, it provided the impetus for development and spurred the movement of things and ideas. Its opening jump-started Worcester’s rapid transition from agriculture to industry, and introduced the Irish to town, the first of many immigrant groups that were to come in search of work and new homes.

Trains
On July 4th 1835, the Boston & Worcester Railroad opened, shortening travel time between the two towns from seven to three hours. Louisa Trumbull of Worcester noted the event in her diary, writing:

Many strangers were attracted by the novelty & the town was crowded through the day. Great expectations are entertained that this facility will increase the business and importance of our town.

Indeed it did. Numerous rail lines soon criss-crossed through town, making Worcester a major transportation center in the northeast. By 1842 ten trains a day rumbled out of Worcester just to Boston. More hotels opened and more public meeting halls were built. The town had become a hub of activity and enterprise.