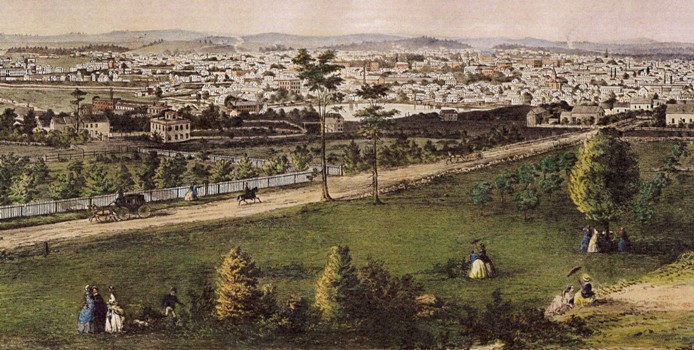 Panoramic View of Worcester from the Oread Institute, J.B. Bachelder, Lithograth of Endicott and Co. N.Y., 1858

Worcester (pronounced Wooster) is the shire town of Worcester County. It is centrally situated in a populous and wealthy agricultural and manufacturing district. It contains four churches (built of wood), a courthouse (built of brick), jail (built of stone), house of correction (built of brick), building of the American Antiquarian Society (built of brick), etc. These have not merely a form and a name but they discover wealth and taste in the community. The village is built principally on Worcester [Main] Street, known through the county as Worcester Street, and contains 350 houses (19 [out of] 20 wood). Many of the situations are splendid and in the best taste. Though the site of the town is low, it ranks among the pleasantest villages in the United States. The houses are mostly white and shaded with green blinds. The small yards before the doors shine the deep green sward through the ornamental fences. The stately elm often overspreads the street. The lofty church spire points into the heavens. A small stream [Mill Brook] crosses the street and runs down the east side of it. The surface of the ground is a little irregular but level on the whole. The general aspect of the town is rural and remarkably neat.

In the years between the American Revolution and the Civil War, the United States experienced tremendous social and economic change. In the rapidly developing Northeast, transportation, industrialization, urbanization, and immigration brought both challenges and problems.

Greene Street has increased amazingly in the course of a year. The houses seem to be formed and placed here by enchantment. I can hardly realise the change which has been affected. In fact the whole town has altered very much. Old houses are continually coming down and new ones as continually filling their places. Worcester is a very large place and in my own humble opinion a very pleasant one.

In the South, slavery became more entrenched, even as it was abolished elsewhere. Cultural and political divides deepened between regions, and new conflicts arose as the country expanded westward. Men and women throughout the country, but especially in the Northeast, responded by organizing themselves into reform movements. The period was so electrically charged with activism that historians called it the “Age of Reform.” In the mid-nineteenth century, Worcester was known as a hotbed of reform.