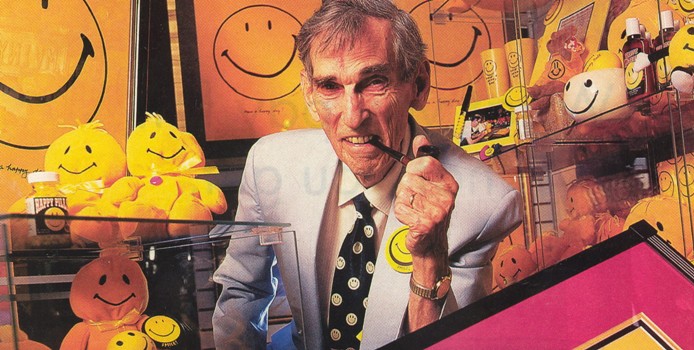 Harvey Ball (1921-2001) was born and raised in Worcester. His father operated a cigar shop at Lincoln Square near the court house, and later worked as a watchman at the Melville Shoe company warehouse on Hammond Street. Ball attended South High School where he was especially interested in art. In his junior year he apprenticed himself to a local sign painter who taught him how to create visual images with strong impact. He won a scholarship to attend the Worcester Art Museum School in 1940, where he received training in fine arts. In his view, working at the sign shop may have been better preparation for his commercial art career than the formal training he received at the Worcester Art Museum School.

Following service in the U.S. Army during World War II, Ball returned to Worcester where he worked for a local ad agency. In 1959, he started his own business, Harvey Ball Advertising. As a freelance artist, he had completed other projects for State Mutual and its affiliates before receiving the smiley face commission in December of 1963. His $240 fee for the entire campaign included $45 for creation of the button. He never realized any further profit on his smiley face design. In 1963, State Mutual Life Assurance Company of America, now All America, faced a problem. The Worcester-based firm had purchased Guarantee Mutual Company of Ohio the previous year to work in conjunction with a State Mutual subsidiary, Worcester Mutual Fire Insurance Company. Low employee morale created by reorganization in the merged companies prompted State Mutual Vice-President John Adam, Jr., to suggest a “friendship campaign.” Adam assigned the task of developing the campaign to Joy Young, assistant director of sales and marketing for the Worcester-Guarantee companies.

Young turned to Harvey Ball, a freelance commercial artist, and asked him to create a little smile that could be used on buttons, desk cards, and posters. Ball drew a smile. Not satisfied with the result, he added two eyes, making a smile face. The whole drawing, he recalled later, took ten minutes.

The Worcester-Guarantee companies launched the campaign in 1964, distributing the initial order of 100 smile buttons to their representatives. Agents and clients enthusiastically responded to the yellow buttons; thereafter Young reordered in lots of 10,000. By about 1978 or 1979, however, the campaign had run its course and the smile face symbol was retired.

Others have tried to take credit for smiley’s creation. A smiling face image was reported to have been used in 1964 to promote a New York City radio station. David Stern, a Seattle, Washington, advertising executive claimed to have created the icon for a bank promotion in 1967. When questioned by reporters in 1993, however, he recanted his story. Bernard and Murray Spain of Traffic Stoppers Inc. appeared on the television program “What’s My Line” in 1971 asserting that they had made the symbol. None of these claims, however, refutes Harvey Ball’s documented Worcester authorship of the smiley face.

Ball continued to work as a graphic designer in Worcester until his death in April 2001. He was also a career military man, retiring from the Army National Guard in 1979 after thirty-seven years of service. In 1990, while campaigning for the Republican write-in candidate for state representative he promoted himself as the creator of the smiley face.

Smiley attained a life of its own well beyond corporate walls. Harvey Ball’s design sparked a fad that swept the nation in the early 1970s and became a symbol for a generation of Americans.

What are the elements of an authentic Worcester-made smiley face? The icon’s playfulness comes from Harvey Ball’s freehand drawing of the features. As he explained, “I had a choice. …Do I use a compass to draw the smile and two perfect dots for the eyes? …Nah, do it freely. Give it some character.”