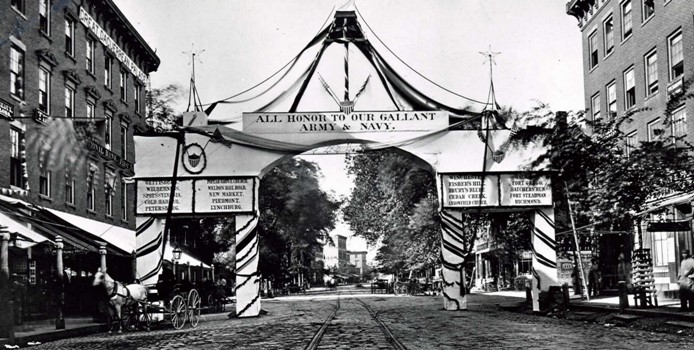 "A triumphal arch (one of many), to honor Worcester soldiers of the Civil War, that was erected on Main Street opposite Harrington Corner," July 1865, Worcester Massachusetts

Making Sense of the American Civil War is a free program, in partnership with the Worcester Public Library that provides the chance for the public to discuss and explore the complex and multi-layered issues surrounding a pivotal moment in America’s history.  This four part series focuses on three literary works about the Civil War: March by Geraldine Brooks, Crossroads of Freedom: Antietam by James McPherson and the anthology America’s War edited by Edward L. Ayers.

Discussions will be led by Dr. John Anderson, Associate Professor of History Emeritus of the College of the Holy Cross, and will touch on the impact the Civil War had upon the nation and will highlight Worcester connections through individual actions, regimental achievements and hometown support.

Pre-registration is required.  Space is limited to 50 participants. Free loaned copies of the selected readings will be available to participants following registration, courtesy of the Worcester Public Library.

This program is supported in part by

John B. Anderson is Associate Professor of History Emeritus at the College of the Holy Cross. At Holy Cross he served for nine years as Chair of the History Department and a term as Speaker of the Faculty. He is a member of a number of professional organizations including the Organization of American Historians and the American Antiquarian Society. His community service includes eleven terms as a member of the Worcester City Council and one term as Mayor of Worcester. He continues as an active member of several local organizations.

From Louisa May Alcott’s beloved classic Little Women, Geraldine Brooks has animated the character of the absent father, March, and crafted a story “filled with the ache of love and marriage and with the power of war upon the mind and heart of one unforgettable man” (Sue Monk Kidd). With”pitch-perfect writing” (USA Today), Brooks follows March as he leaves behind his family to aid the Union cause in the Civil War. His experiences will utterly change his marriage and challenge his most ardently held beliefs. A lushly written, wholly original tale steeped in the details of another time, March secures Geraldine Brooks’s place as a renowned author of historical fiction.

The Battle of Antietam, fought on September 17, 1862, was the bloodiest single day in American history, with more than 6,000 soldiers killed–four times the number lost on D-Day, and twice the number killed in the September 11th terrorist attacks. In Crossroads of Freedom, America’s most eminent Civil War historian, James M. McPherson, paints a masterful account of this pivotal battle, the events that led up to it, and its aftermath. McPherson brilliantly weaves these strands of diplomatic, political, and military history into a compact, swift-moving narrative that shows why America’s bloodiest day is, indeed, a turning point in our history.

Edited by Edward L. Ayers, America’s War is an anthology of Civil War writing originally published between 1852 and 2008. Co-published by the American Library Association and the National Endowment for the Humanities, America’s War was created in support of the reading and discussion program Making Sense of the American Civil War. The selections in America’s War include works of historical fiction and interpretation, speeches, diaries, memoirs, biographies, and short stories. Together, these readings provide a glimpse of the vast sweep and profound breadth of Americans war among and against themselves, adding crucial voices to our understanding of the war and its meaning.

The Shape of War