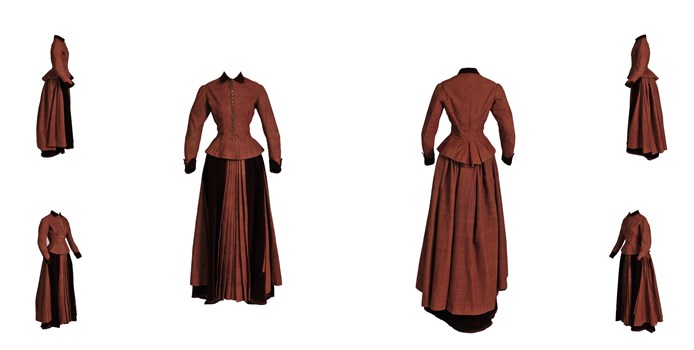 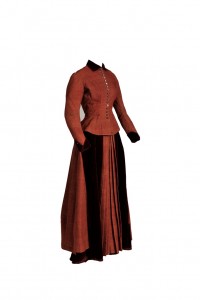 This two-piece dress was made by Matilda “Thilda” Ahlstrom (1847-1925) who, according to family tradition, wore it when she crossed the Atlantic from Sweden to America to marry John Jeppson Sr. (1844-1920).

They arrived at the very beginning of a huge wave of Swedish immigration to Worcester, men and their families pushed by famine and dwindling opportunity at home and pulled by the possibility of (male) employment at Norton or Washburn & Moen. So many Swedes settled in Worcester that by 1915 one of every five residents was of Swedish descent. 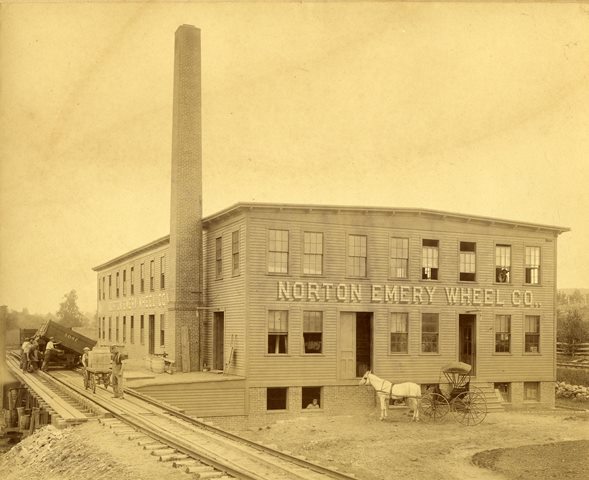 In 1873, the year their son George (1873-1962) was born, depression hit and John was laid off. They moved to Taunton, then Portland, and West Sterling in search of work. A family member related that Thilda hired out as a seamstress and bartered her needlework for fabric and thread to make clothing for the family. When the depression eased in 1880, John was re-employed at Norton and the family returned to live among friends and relations in Worcester. He pursued developing technology to make grinding wheels and in 1885 founded Norton Emery Wheel Company. 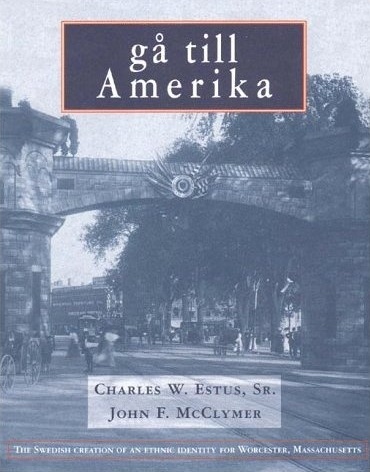 Thilda continued to sew. Family support, as a descendant proudly explained, was a partnership.

The family obviously attached special significance to this garment as it was handed down to Thilda’s son and then to her grandson, whose widow recently donated it to the museum. While the bodice is pristine, the skirt has been altered several times, suggesting re-use by others over the decades.

You can learn more about the Swedish experience in Worcester with a visit to the museum or by reading Gå till Amerika: The Swedish creation of an ethnic identity for Worcester, Massachusetts, available in the museum’s gift shop or in our online store. Explore the history of Norton Company, and its current incarnation Saint-Gobain, in our exhibit In Their Shirtsleeves now on exhibit in the Fuller Gallery of Industrial History.