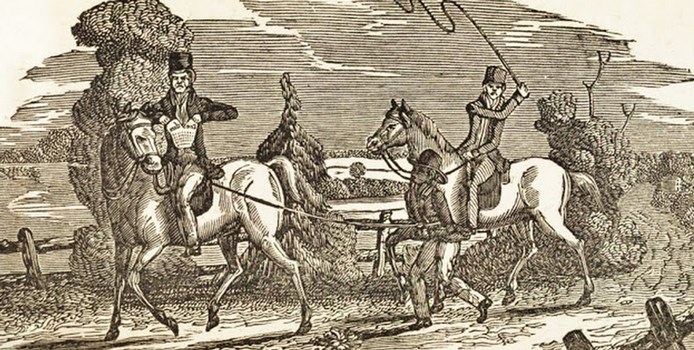 "Kidnapping," from The Picture of Slavery in the United States of America, by George Bourne, 1834. Wood engraving designed by H.A. Munson and G.W. Flagg. 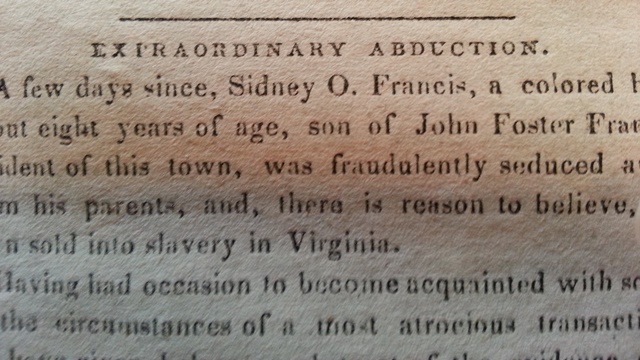 “Extraordinary Abduction” announced the headline in Worcester’s National Aegis, when it reported the kidnapping of a local boy. Could eight year-old Sidney O. Francis have guessed his fate when he brought two white men home to his mother on September 12, 1839?

Under the guise of businessmen from Palmer, two men using the names Pearly Shearer and John Dickenson came to Worcester on an insidious mission to abduct a young boy of color to sell into slavery. Why would the duo choose Worcester, a community known for its liberal abolitionist leanings?

In 1839, Worcester was one of few communities in New England with a population that included people of color (7,500 inhabitants, 151 of which were described as people of color, which included Blacks, Native Americans, and people of mix-race.) Most of this population lived in the vicinity of lower Summer and Mechanic streets in a neighborhood known as “Guinea,” due to the racial makeup of the community. The city’s demographics and central location as a railroad hub created a perfect combination that would allow for the abduction of a child and a speedy escape. 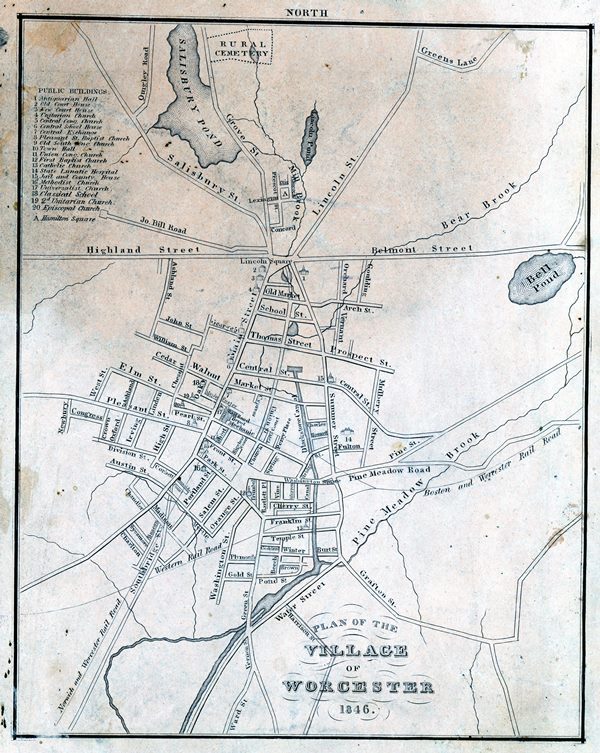 When Shearer and Dickenson came to Worcester it is possible that they sought out the “Guinea” neighborhood. The first mark they approached was Samuel Johnson. The men inquired if he had a son available for hire. Johnson declined, but stated that there were many boys available in the village.  The pair moved on to Pine Street (now Shrewsbury Street) where they meet Sidney Francis.  Approaching the child, Shearer and Dickenson inquired about his parents and Sidney brought them home to his mother.

Upon meeting Sidney’s mother Diana, Shearer and Dickenson presented a sincere ruse. They stated the need for a boy to run errands in a store and do light work. Dickenson even declared he had worked for Shearer and that there “could be no better man.” It was not unusual for a child to be sent away if the employers paid for education, clothing and food, as it eased the burden on the family. With the mother convinced, Sidney was instructed to take the two men to his father, John F. Francis, who was at work at one of the railroad depots and obtain his consent. Although wary of the sixty mile distance between Worcester and Palmer, Francis agreed on a trial period. Shearer and Dickenson then left with the boy.

A day or so after his son’s departure, Francis began asking about Shearer. Hearing dubious accounts of character, Francis grew suspicious and left for Palmer to retrieve his son. Francis had no way of knowing that Sidney had already been ferreted across state lines to Virginia, given the name Franklin, and sold as a slave.

On September 19, 1839, a letter arrived from Benjamin Clark, mayor of Fredericksburg, Virginia. The letter indicated the apprehension of a man known as Dickenson Shearer of Palmer, who arrived in Fredericksburg on the 15th. Shearer stayed in Fredericksburg at the Farmer’s Hotel for four days. During this time he sold a young boy to a slave-trader named Francis L. Wilkinson. According to the letter, the transaction and “the circumstances were so suspicious as to lead to inquiries and to his [Shearer’s] arrest.”

Wilkinson was also arrested and testified against Shearer. The slave boy was identified as Sidney Francis of Worcester. The kidnapper claimed that Sidney’s father had given him the boy, “until he should arrive at the age of 21.” Sidney countered this statement, testifying that his father agreed he would live with Shearer and work at a store in Palmer. In January of 1840 Shearer was sentenced to two days of solitary confinement followed by seven years of hard labor at Charlestown (assumed in Massachusetts). His accomplice, Elias Turner a.k.a. John Dickenson, received a suspended sentence.

Sidney was reunited with his family in Worcester. Nothing is known of Sidney’s life after his abduction. He died at the age of nineteen in 1850, the same year as his father. Both the Massachusetts Spy and National Aegis announce his death, but do not state the cause.

Special thanks to Don Rowe of Central Rappahannock Regional Library of Fredericksburg, Virginia for providing additional background information on the case.

3 comments on “Extraordinary Abduction: The Kidnapping of Sidney Francis”