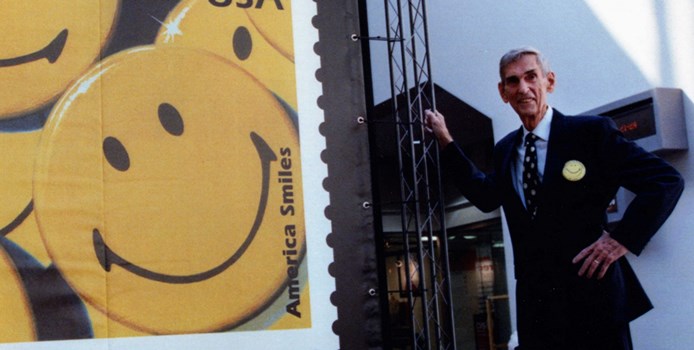 Harvey Ball at the Worcester Common Fashion Outlets for the unveiling of the Federal Post Office's smiley face stamp, 1999.

The power of a smile is unlimited… A smile is contagious. It is entertainment and medicine. It is food for friendship. It is vital to business associations and to society.

Joy Young, assistant director of sales and marketing, contacted Harvey Ball, a freelance commercial artist, and asked him to create a little smile that could be used on buttons, desk cards, and posters. Ball drew a smile. Not satisfied with the result he added two eyes, creating a smiley face.

On January 3, 1964 Worcester-Guarantee launched its internal campaign introducing Ball’s smiley face  to its employees. This simple smile would eventually become familiar to millions of people world-wide and become a pop culture icon.